Bioscience Association Manitoba will be presenting awards to the best in the industry at the 32nd Annual Awards Gala, “The Magic of Science”. 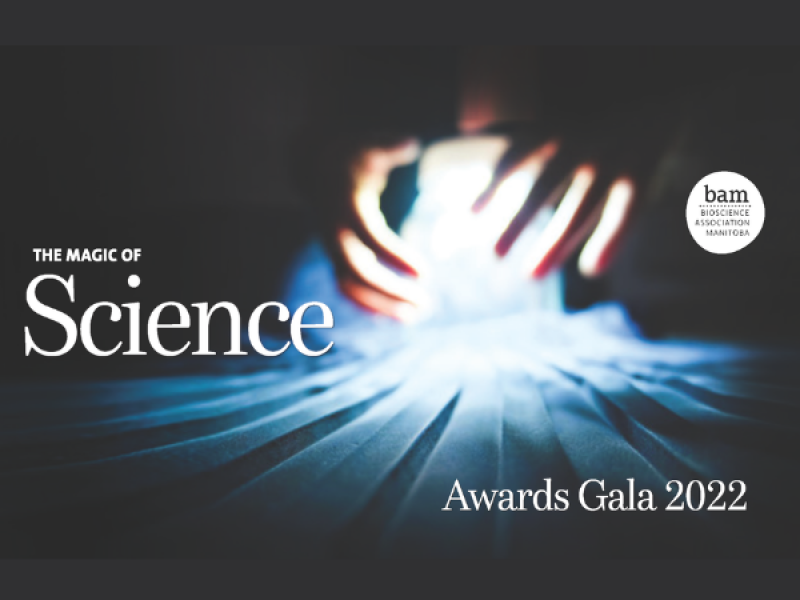 Bioscience Association Manitoba will be presenting awards to the best in the industry at the 32nd Annual Awards Gala, “The Magic of Science”.

BAM’s Awards were launched in 1990 to recognize individuals who have demonstrated outstanding exemplary vision in leadership and innovation, and companies that show significant achievement in paving the road toward future wealth and job creation in the bioscience industry. All winners will be recognized on March 3,2022 in Winnipeg.

The four awards winners for are:

Most Promising Bioscience Student of the Year - Gabrielle Fontaine, a Master’s student at the University of Manitoba, focuses her research on microwave sensing for breast cancer; a low-cost, safe, and non-ionizing modality that makes breast cancer detection easier and more accessible. As one of the few Anishinaabe women in STEM, Gabrielle is aware of the need to promote greater equity, diversity, and inclusion and hopes to attract more Indigenous students to the field.

Outstanding Leadership in Bioscience - Marshall Ring, President & CEO of Manitoba Technology Accelerator (MTA), is an expert speaker on commercialization. His Angel investments have helped over a dozen high technology start-ups secure resources and funding to expand their businesses. Marshall is a tremendous supporter of start-up companies, entrepreneurs, and the future growth of Winnipeg.

Emerging Bioscience Company of the Year - Prairie Fava, is the only toll manufacturer focused solely on fava as a “whole food ingredient” - from seed to farm to fork. Co-founders Cale and Hailey Jefferies lead side by side, each bringing a unique set of knowledge and skill to the business and envision a demand for this ancient bean globally.

Bioscience Company of the Year - IVC Vita Health, is a local nutritional supplement company. Established in 1936, it has grown from a small mail-order operation selling herbs and patented medicines to one of Canada’s foremost suppliers of over the counter (OTC) pharmaceutical and natural health products. IVC Vita Health produces more than 2.5 billion tablets per year which are packaged into 30 million bottles sold by 1300 different brands.

“It is always a great pleasure to recognize the best our industry has to offer,” said Kim Kline, President of Bioscience Association Manitoba.  “Science is magical. Not only is it the driving force of our natural world, but it’s what innovators use to solve problems in people's lives. We depend on science to solve mysteries and help uncover new and innovating ways to heal, feed, and fuel our world. There are brilliant trailblazers spearheading new technologies and making new discoveries in Manitoba every day, and BAM is excited and honored to share and celebrate their magic.”

The Manitoba bioscience sector is thriving. Our industry generates over $10.4 billion in revenue, employs over 16,000 individuals and ranks 4th in the province among all major industries. Manitoba is leading our country and the global community into the future of bioscience.

Bioscience Association Manitoba (BAM) enables commercial success for Manitoba’s bioscience companies by acting as a catalyst for innovation, expanding the sector’s skills and workforce development, and leading with one unified voice to create local and global engagement.