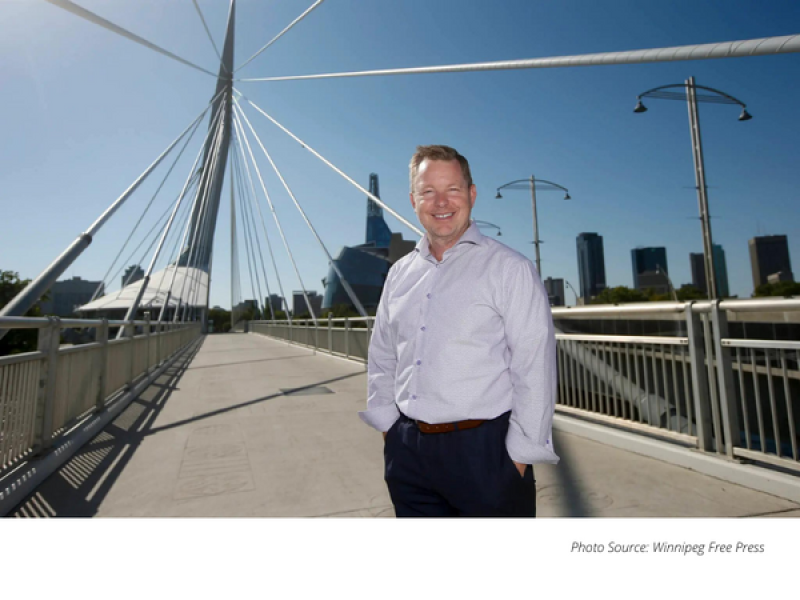 Manitoba Technology Accelerator is a quintessential homegrown entity with the economic growth of the community among its core principles.

But on the other hand, it has bold, outsized ambitions for a province with a reputation for modesty.

Among other things, it wants to build more $100-million companies in Manitoba — SkipTheDishes has been MTA’s highest profile success story — and to make Winnipeg the startup capital of Western Canada.

With this week’s release of the organization’s 2021-22 annual report showing a $2.5 million surplus for the year, it has officially launched its in-house investment vehicle, MTA InvestCo, that MTA CEO Marshall Ring said is expected to invest between $2 million and $4 million annually.

With such aspirational targets now institutionalized in its mandate, the organization is also about to complete the redevelopment of the building on the Esplanade Riel — the site of several ill-fated restaurants — that will befit the grandeur of its vision.

There will be about $200,000 worth of technology installed in the space before the end of the month and MTA is on target to exceed the $250,000 worth of renovations it promised the city when it was awarded a five-year lease on the building last year, Ring said.

It will soon erect signage that will rename the building International Centre for Innovation (ICI) with a francophone tag line: on brasse des idees (where ideas happen).

“We want this place to be a digital and technology environment that helps normalize ‘world class’ in Winnipeg,” he said.

Whereas Winnipeg has a predisposition to be OK with lagging behind other places when it comes to innovation, Ring said, its new International Centre for Innovation will help people realize “that Winnipeg has world-class infrastructure, ideas, people.”

MTA’s ability to branch out is mostly a result of its successful participation in Immigration Refugees and Citizenship Canada’s Startup Visa (SUV) program. (MTA was named a designated entity to participate in the IRCC program along with a few dozen others across the country when it was originally launched.)

Five years in, MTA now has 400 active international startups and scale-ups in its SUV program. MTA provides business mentoring and coaching to foreign entrepreneurs seeking to emigrate to Canada with their technology startup business plans. It receives a fee for that service, and while those entrepreneurs are under no obligation to settle in Winnipeg, MTA provides incentives for them to do so.

(MTA does not play a role in those entrepreneurs’ efforts to gain permanent residency in Canada, and Ring said that immigration process can hamper the speed at which the businesses are able to develop.)

With a group of about 30 experienced contract consultants, MTA has generated such a volume of business that the non-profit now has extra cash to start investing more systematically in some of the companies it is incubating.

With the creation of MTA InvestCo along with the province’s $50 million commitment to venture capital, it means one less reason for entrepreneurs to feel the need to go elsewhere.

That, in addition to its long-standing model of earning up to five per cent equity in the domestic companies it supports through its commercialization unit, has provided a solid capital base to expand into an investment vehicle.

“We’re now at a point where MTA is very stable and able to now re-invest back into community,” said Ring.

Ryan Klassen, the head of Bell MTS and vice-chair of Bell’s operations in Western Canada, is the chair of the new MTA InvestCo.

“This is absolutely core to fulfilling MTA’s mandate,” said Klassen who has spent time on MTA’s board in the past.

“Access to early stage risk capital is incredibly important to try to help support those companies that are starting to grow here,” he said. “Ultimately we want to see them develop here and be successful here and that ultimately fulfils the mandate of the organization.”

Prior to the completion of the legal structure for the wholly-owned investment entity, it already put out about $1 million over the previous year, investing in companies including Cubresa Inc., PowerHV Inc., Fastab Inc., UVSee Inc., and Feed Flow Inc.

PowerHV, which has designed equipment that makes power lines safer and more efficient, is about to start its first commercial installation in Kenya and South Africa.

MTA InvestCo is expected to invest in companies that are at the early growth stage with capital of between $50,000 and $400,000.

Our partner BioTalent Canada has launched the Building Workplace Resiliency resources for its I.D.E.A.L. Biosciences Employer Recognition Program. This program served as a guide for employers seeking to submit fall program applications.