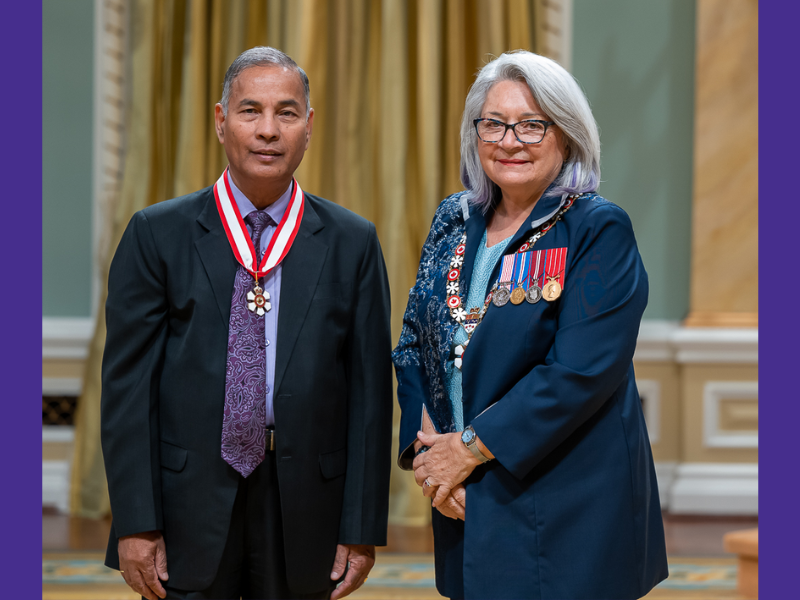 Dr. Digvir Jayas, who completed his most recent term as Vice-President (Research and International) was invested as an Officer of the Order of Canada on October 20, 2022.

At a ceremony in Rideau Hall in Ottawa, Her Excellency the Right Honourable Governor General Mary Simon presented Dr. Jayas with his medal, one of Canada’s highest honours. He had previously been recognized for “advancements to agricultural practices worldwide, and for promotion of academic and scientific research in Canada.”

This week, Dr. Jayas’s citation read: “Digvir Jayas is helping to nourish the world through increased access to safe and nutritious food. An authority on grain storage at the University of Manitoba, he developed new methods to prevent spoilage and loss, which have advanced agricultural practices worldwide, notably in Canada, China, India, Ukraine and the United States. He has made vital scientific and humanitarian contributions by improving both the quantity and quality of international food supplies. Generous with his energy and expertise, he is helping to drive research in Canada as a leader in science and academia.”

A celebration of the career of Dr. Jayas at UM was held last week, acknowledging his many years of service to the university community. He has a lifelong commitment to understanding causes of food spoilage and developing solutions for reducing grain losses to curtail global hunger through modernized grain storage systems. He is well known for cross-faculty collaboration, previously serving as associate dean (research) in the Faculty of Agricultural and Food Sciences, head of the department of biosystems engineering, and interim director of the Richardson Centre for Functional Foods and Nutraceuticals.