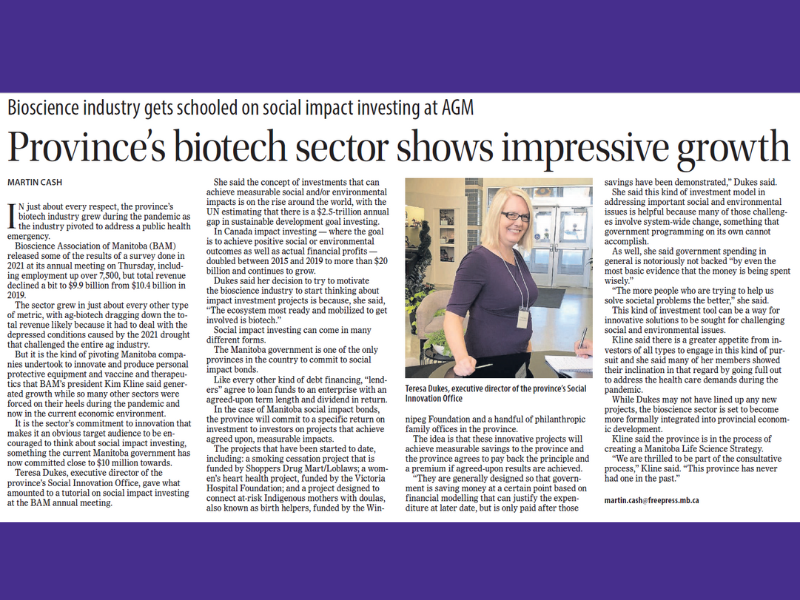 In just about every respect, the province’s biotech industry grew during the pandemic as the industry pivoted to address a public health emergency.

Bioscience Association of Manitoba (BAM) released some of the results of a survey done in 2021 at its annual meeting on Thursday, including employment up over 7,500, but total revenue declined a bit to $9.9 billion from $10.4 billion in 2019.

The sector grew in just about every other type of metric, with ag-biotech dragging down the total
revenue likely because it had to deal with the depressed conditions caused by the 2021 drought
that challenged the entire ag industry.

But it is the kind of pivoting Manitoba companies undertook to innovate and produce personal protective equipment and vaccine and therapeutics that BAM’s president Kim Kline said generated
growth while so many other sectors were forced on their heels during the pandemic and
now in the current economic environment.

It is the sector’s commitment to innovation that makes it an obvious target audience to be encouraged to think about social impact investing, something the current Manitoba government has
now committed close to $10 million towards.

Teresa Dukes, executive director of the province’s Social Innovation Office, gave what amounted to a tutorial on social impact investing at the BAM annual meeting.

She said the concept of investments that can achieve measurable social and/or environmental
impacts is on the rise around the world, with the UN estimating that there is a $2.5-trillion annual
gap in sustainable development goal investing.