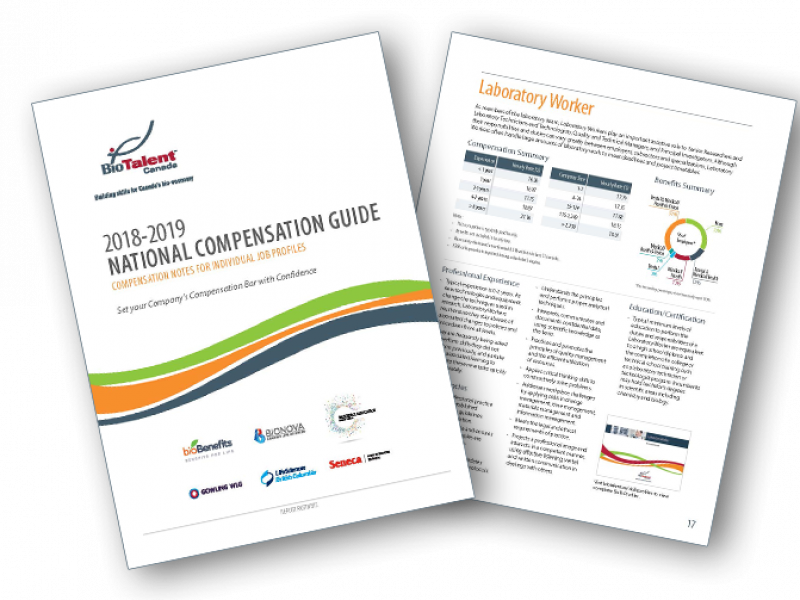 First launched in 2015, the annual guide has proved popular among BioTalent Canada’s national and provincial association partners and their members and stakeholders; providing them with up-to-date compensation and benefits information for some of the bio-economy’s most popular job functions.

“Thanks to the support and circulation increase over the years from our national and provincial association partners, we have greatly enhanced the feedback and timeliness of the guide as an HR tool for Canadian bio-economy companies,” said Rob Henderson, President and CEO of BioTalent Canada.

A leader in labour market reporting for Canada’s bio-economy, BioTalent Canada’s compensation information helps small and medium-sized enterprises alleviate the pressures of attracting and retaining talent in a competitive industry by providing a national benchmark for them to build upon.

“Since 2007, BioTalent Canada has published over 20 labour market reports highlighting the in-demand skills needed for industry success,” said Henderson. “This guide offers employers another extension of the valuable labour market information we produce, in the form of compensation data, to remain fair and competitive in a growing marketplace.”

This year’s edition of the National Compensation Guide adds two new positions, Public Relations Director and Technical Support Manager, to the existing 34 skills profiles.
Among others, key organizations that support the initiative as partners include:

For more information on the National Compensation Guide, visitbiotalent.ca/CompensationGuide.

NOTE: Members of BioScience Association Manitoba could qualify for a free copy of the National Compensation Guide.