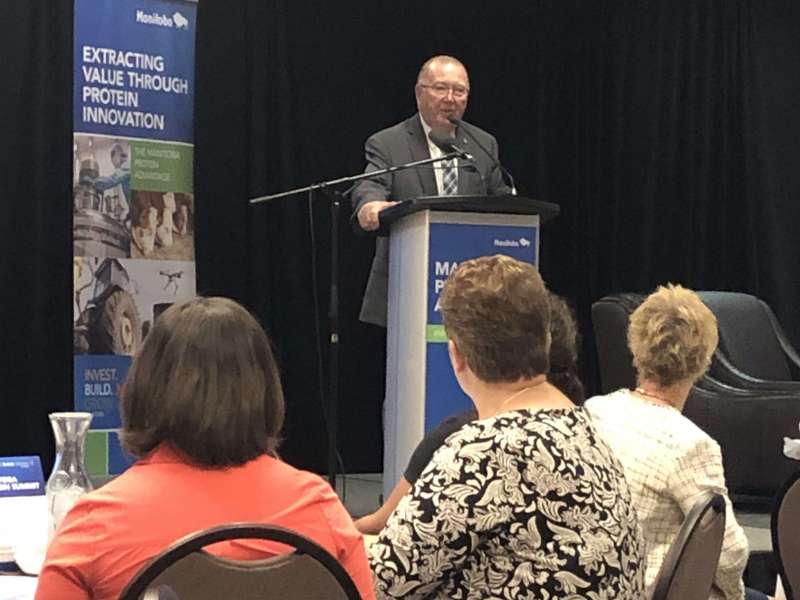 From Government of Manitoba:

“Plant-protein demand is increasing at more than six percent per year, with world demand expected to double by 2029, and animal-protein demand expected to double by 2050,” said Eichler.  “Historically, Manitoba has always been strong in protein production.  However, by gathering here today, we are discussing additional opportunities that will make sure we can reap economic benefits through expanding livestock and plant-protein production and processing.”

At the summit, the province released a first-of-its-kind sustainable protein strategy, called the Manitoba Protein Advantage.  This strategy will focus future efforts and encourage leadership and industry collaboration to make Manitoba North America’s protein supplier of choice, the minister said.

“Since 2016, Manitoba has attracted over $1.5 billion in agri-food investments,” said Eichler.  “The strategy will maintain the Manitoba government’s focus on creating an environment for investment attraction while supporting research and innovation, and reducing red tape.”

As part of the strategy, the Manitoba government is making key investments to further protein innovation, said Eichler.  The Food Development Centre (FDC) will be receiving $362,000 to support protein sector innovation and commercialization.  This investment in equipment will accelerate the pace of protein ingredient development and further position the FDC as a leading protein innovation centre.

Today’s summit also marked the minister signing a memorandum of understanding (MOU) to become part of the Protein Highway, a cross-border network for plant-based protein innovation.  Through the partnership, Manitoba will become part of an innovation network to increase collaboration opportunities for Manitoba researchers and companies across the Prairie provinces and U.S. Midwest and Great Plains regions.  The MOU will establish and continue collaborative activities between the parties related to research, innovation and commercialization projects.

Also announced at the Manitoba Protein Summit was the creation of the Manitoba Protein Product Challenge, a competition that will bring together protein entrepreneurs to accelerate commercialization of plant- and animal-protein products.  The first challenge will take place in March 2020 on Farm and Food Awareness Day.

Manitoba will also be developing a Manitoba Protein Development Consortium, which will co-ordinate industry, academic, and government efforts in protein industry development and alignment on strategic projects, said the minister.

A copy of the Manitoba Protein Advantage can be found online at www.gov.mb.ca/agriculture/protein/index.html.